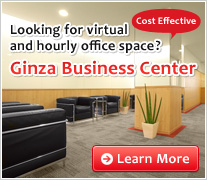 Ginza ("Silver Seat") takes its name after the silver mint that the Edo government founded nearby in the early 17th Century. The modern Ginza district became known as "Bricktown." The Ginza fire of 1872 destroyed the old town and as a result, the government contracted English architect Thomas Waters to rebuild it entirely in brick. It was completed in 1875. Shops took root on the main street and provided early Tokyo with a modern facade.

Ginza came to life by the mid-1880s. In 1882 a horse-trolley went into service, taking sightseers north to Nihonbashi and later extending to Asakusa. In that same year electric streetlights lit up the district, giving birth to Ginza's nightlife. Ginza's exotic appeal to Japanese, along with its growing reputation as a modern shopping area drew people from everywhere. "Ginbura" (Ginza-wandering), which saw its heyday among youths in the 1920s and 1930s became a common pastime.

One example of a renowned shop in Ginza was the Hattori Watch Company famous for its clock tower. From 1885, this shop stood at the main intersection of Ginza. The Hattori Clock Tower became a symbol of the center of Ginza. This site, known as Ginza Main Crossing,is now the location of one of Japan's flagship upscale department stores

The Taisho period (1912-1926) was when Ginza and Ginza-cruising (Ginbura) truly became popular. Ginbura crowds typically in their twenties could be seen hanging out and killing time up and down the main street. It was a new cultural development in Tokyo.

Just as Ginza was coming into its own, the Great Kanto Earthquake struck on September 1, 1923, devastating much of Ginza and the rest of Tokyo. It was rebuilt, however, and new branches of Japan's main department stores began opening up alongside trendy boutiques, beer halls, bars, and cafes. A new Kabuki-za also opened off of the main street. By the mid-1920s it was thriving and busy. The construction of a new subway line, the Ginza line helped make Ginza more accessible.

After the post-Earthquake reconstruction, Ginza-cruising mobo ("modern boys") and moga ("modern girls") returned to hanging out among the business people in this modern urban environment.

During the 1920s cafes more than doubled and they became the favorite hangouts of writers, intellectuals, students and aspiring artists. The main drag of Ginza gained the reputation as being the most cosmopolitan place to see or be seen. In the 1960's Japan experienced rapid growth and development. The younger people moved to the Shinjuku area and Ginza developed as a playground for a more adult crowd. In the 1970's Ginza saw the first closing of the main street to traffic referred to as "walkers paradise"

Ginza has always been at the forefront of fashion, economy, and culture in Tokyo. It is a place where the traditional meets the modern.A place of ideas, trends, information, media, fashion and culture. From the Edo period through Meiji, Showa and Heisei periods in Japan, Ginza is the place to be and to be seen, the place to do and to be done. In the 1990's the area was redeveloped with many famous international brand shops side by side with Japanese brand shops.
Ginza's unique building rule of all the buildings being the same height gives the Ginza facade a special appearance and atmosphere enjoyed by everyone.

Since it's beginning Ginza has been a cutting edge place in Japan.
The many faces of Ginza make it an ever-evolving place.
+81-3-6215-8129 Contact Us